Slutwalk – Because nothing screams “EQUALITY” like walking around in public with duct tape over your nipples.

I don’t get it. I really don’t. How did feminism turn into this?

Some of the mostly women in the crowd went topless with some well-placed x’s on their breasts made of duct tape.
The event is part of an international “Slut Walk” movement.

It started several years ago after a police officer in Canada told some college students that woman should avoid dressing like sluts in order not to be victimized. His words sparked outrage.

The women who organized the local event say they’re fighting what they call rape culture and supporting victims of sexual assault.

“The idea that acts of violence can be excused due to a victim’s dress, state of intoxication, location and sexual history is absolutely ridiculous and feeds into a cultural view of sexual assault as not a real crime,” said organizer Liz Sheridan.

After the rally, they marched through the streets chanting, “Whatever we wear, wherever we go, yes means yes, no means no.”

My 80 year old mom is one of those second-wave feminists from the Sixties and Seventies, so I called her and asked her to explain slutwalking to me. She said:

“I don’t have a clue. I told you not to bother me with this stupid stuff when I’m watching my shows.”

Can any of you explain this slutwalk thing to me?

I do understand one thing. Any guy who participates in a slutwalk is hoping to get laid, or at least wants to see some boobs.

Apparently the highlight of the event was when they busted open a “rape culture” pinata filled with condoms. That’s another silly idea I will continue to heap scorn upon. 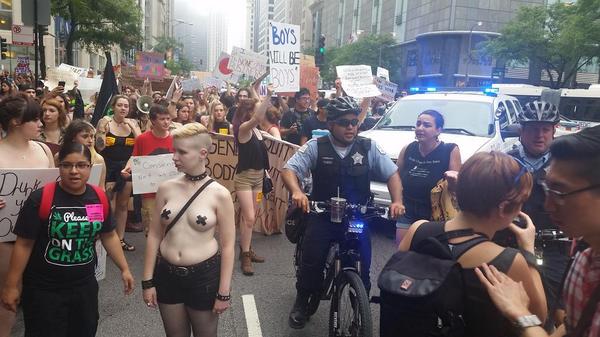 119 Responses to Slutwalk – Because nothing screams “EQUALITY” like walking around in public with duct tape over your nipples.