Bob Costas is the most annoying fuckwit since Jar Jar Binks. Actually, he was annoying before Jar Jar too.

Thursday night NFL and I forgot about the Bob Costas involvement. Can't wait to be lectured at halftime. #Kickoff2014

Hey, does anybody know what Bob Costas' sermon is about this week?

"Hello, sports fans, and welcome to another NFL season! I'm Bob Costas, and before we begin, a few words about the minimum wage…"

"Hi, everybody, I'm Bob Costas, and welcome to halftime. Seattle leads 17-10. But let's talk about climate change for a moment…"

Sports is the place I go to escape politics. I spend most of my waking hours reading, writing and arguing about politics. Sometimes I need a break.

Last night was the first NFL game that counted since last February 2nd. I have been eagerly anticipating this season since the Raiders drafted Khalil Mack and Derek Carr last May.

Unfortunately, my enjoyment of the game was ruined even before the opening kick-off.

I don’t care if Michael Sam is gay. Seriously, I do not give a shit either way. But apparently no discussion of the NFL is complete without bringing Sam into the conversation. Forget that he was a seventh round pick. Forget that he is undersized and slow by NFL standards.

Well, actually Sam isn’t an NFL player. He was drafted by the St. Louis Rams, but like a lot of other late-round draftees he didn’t make the final cut. So now he is in Dallas working on their scout team. Thus far he has not played a single down in a regular season NFL game. Perhaps he never will.

If I go to a Oakland Raiders home game, nobody cares if I am a Republican or a Democrat. Nobody asks if I am a conservative or a liberal. My positions on abortion, gun control, and immigration are not issues. Nobody cares if I am white, black, brown, gay or straight. It doesn’t matter where or if I went to college.

All that matters is that I am wearing silver and black. When I walk around Oakland Coliseum with a Raiders hat and shirt on, every other Raiders fan in the place is my friend. The same thing happens if I go over to AT&T Park in San Francisco wearing black and orange. I immediately have tens of thousands of BFFs for several hours.

We constantly hear about how polarized our country has become in recent years. And it has become more and more divided, especially on racial lines. At the same time we have seen more and more aspects of life become politicized.

Coincidence? I think not.

Sports is an area of modern society where people of very diverse backgrounds can come together to find common ground. As much as possible we need to keep politics out of sports. Focus on the game and the players. Keep it as pure as possible.

We can start by telling Bob Costas to STFU. 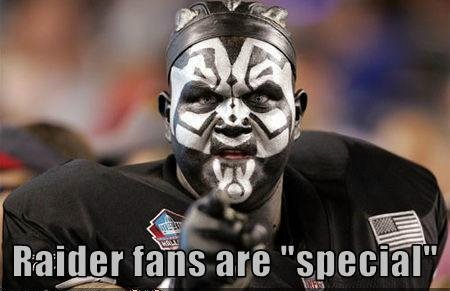 89 Responses to Politics is Ruining Sports