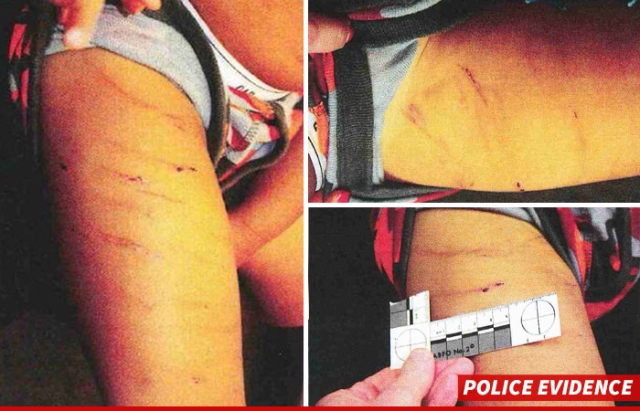 This is turning out to be an ugly year for the National Football League:

Adrian Peterson Indicted For Child Abuse, Will Not Play Sunday

A warrant was issued Friday for the arrest of Vikings running back Adrian Peterson after a grand jury in Texas indicted him for reckless or negligent injury to a child.

Peterson will not play in Sunday’s game at TCF Bank Stadium against the New England Patriots. On Friday afternoon, the Vikings said Peterson had been deactivated. That’s different from a suspension, as Peterson will be still be paid as officials investigate.

Peterson’s lawyer, Rusty Hardin, said the star running back would travel to Texas Friday night to post bond as soon as it can be arranged.

Sports Radio 610 in Houston obtained a draft of the police report which says Peterson admitted that he did, in his words, “whoop” one of his children last May while the child was visiting him at his home near Houston.

The punishment happened after Peterson’s son pushed another of Peterson’s children off of a motorbike video game, the report says.

During a Skype session with his mom back in Minnesota, the 4-year-old boy asked if he could tell her something. According to the report, Peterson said, “Go ahead and tell her and show her what happened.”

The boy said he got a whooping with a switch — a wooden rod or tree branch used for punishment.

When the boy returned to his mother in Eden Prairie, Minn., she took him to a doctor.

The doctor told investigators that the boy had a number of lacerations on his thighs, along with bruise-like marks on his lower back and buttocks and cuts on his hand.

The police report also includes text messages between Peterson and the boy’s mother. First he texted to her: “You will be mad at me about his leg.” Later, he texted: “He got about five more pops than normal. He didn’t drop one tear! … He’s tough as nails.”

In further text messages, Peterson allegedly said, “Never do I go overboard! But all my kids will know, hey daddy has the biggie heart but don’t play no games when it comes to acting right.”

When investigators questioned Peterson, they say he told them he regarded it as a normal spanking and not excessive. He told investigators, “To be honest with you, I feel very confident with my actions because I know my intent,” and when asked if he would reconsider using switches in the future, said he would never “eliminate whooping my kids … because I know how being spanked has helped me in my life.”

A grand jury seated earlier this summer decided not to charge Peterson, but a second grand jury indicted him on Thursday.

On Friday, Peterson told WCCO-TV’s Mike Max that he didn’t think he’d face another indictment. The day’s developments caught him by surprise.

If Peterson is convicted, he could face up to two years in prison.

Incredibly, some people on social media have been defending Peterson!

Raising kids isn’t easy. We have an obligation as parents to teach kids right from wrong, and to protect them from harm. Sometimes you have to hurt kids a little to keep them from getting hurt a lot. A stinging swat on the hand or buttocks of a child stimulates those primitive parts of the child’s brain connected to survival.

You don’t want your kid to run in the street or touch a hot stove. If your child is about to do something dangerous you want them to freeze if you yell a single command. You don’t have time to explain why and can’t physically stop them in time.

You want them to act reflexively when you shout “No!” or “Stop!” or even just their name.

So you start when they are toddlers by swatting their hands and saying “No!” in a loud voice when they start to reach for things you don’t want them to touch. Your child is startled by the sound of your voice and the sting of the slap. They will probably cry. You let them.

For thousands of years spanking was seen as a legitimate and necessary tool for disciplining children. Untold millions of kids got spanked and turned out okay. Then somewhere around the 1950’s the “experts” decided that they knew better and that spanking was bad.

My family wasn’t what you would call “early adopters” of this newfangled type of parenting. I got spanked with bare hands, belts, paddles, metal flyswatters, switches, slippers, rolled up newspapers, wooden stirring spoons and metal spatulas. Most of the spankings I got were well deserved. Never once did I get a beating like Adrian Peterson’s kid.

Corporal punishment is very limited and controlled. It causes just enough pain to get the child’s attention and is used as a last resort. When kids get older it loses it’s effectiveness and you stop using it.

If you are leaving cuts, bruises, and/or scratches you are doing it wrong. If there are still marks on a four-year-old several days later then it wasn’t discipline, it was abuse. If you are whipping a kid over and over that isn’t parenting, it’s rage. If you can’t tell the difference between discipline and abuse then you have no business being a parent.

Any crime done to a child is worse than that same crime committed on an adult. We have a duty to protect children. That is why Adrian Peterson deserves more severe punishment than that given to Ray Rice.

102 Responses to This is what child abuse looks like