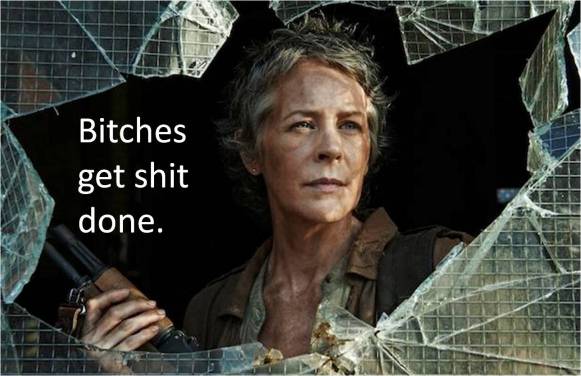 The last post is rolling forward with 130+ comments, so I guess it’s time for a new one. I’m off today. #Yay!

If you saw last night’s episode of The Walking Dead, you know it was an explosive introduction to Season 5. I won’t spoil it for those who have yet to catch up by elaborating any further. Let’s just say that as we limp along toward midterm election 2014, the media is cooperating with additional explosives.

Case in point: The Left decided today that after two weeks of whatev-ing the ebola panic, it was time they took proper advantage of the rising fear with this new angle: Ebola Vaccine Would Likely Have Been Found By Now If Not For Budget Cuts: NIH Director.

While I totally get the reaction of The Right to argue against that by inspecting the NIH budget for waste, I’m not sure this headline was the way to go: Fat Lesbians Got All the Ebola Dollars, But Blame the GOP. *STOOPID*

In other WTF news, the US military is now on board with Climate Hyptivists: Pentagon Says Global Warming Presents Immediate Security Threat. Interesting little paragraph buried halfway down:

“Climate change and water shortages may have triggered the drought that caused farmers to relocate to Syrian cities and triggered situations where youth were more susceptible to joining extremist groups,” Dr. King said. The Islamic State has seized scarce water resources to enhance its power and influence.

So urban living is the way to go in the United States, but not so much in the Middle East. More of the for me, but not for thee thinking so common in certain quarters these days. WTF? See this dazzling piece of self-absorption for what I’m talking about with that type of mentality.

In other news, the FBI missed 1,000,000 rapes. But this patriarchy apologist would like to remind you not to get too zealous about that.

The Klown had this to add:

Fremdschämen: A German term which describes the process of being vicariously embarrassed by someone else.

The Wendy Davis campaign has descended past farce and is now just embarrassing to everyone. Somebody should implement the Mercy Rule and pull the plug on her campaign before she humiliates herself any further.

Seriously, this is not fun to watch.

It’s all about the show, folks, and competition for audience is fierce. What are you watching?

Bitch, please.
View all posts by Woke Lola →
This entry was posted in #Ebola, Global Warming, Zombies. Bookmark the permalink.