Everything They Say Is A Lie 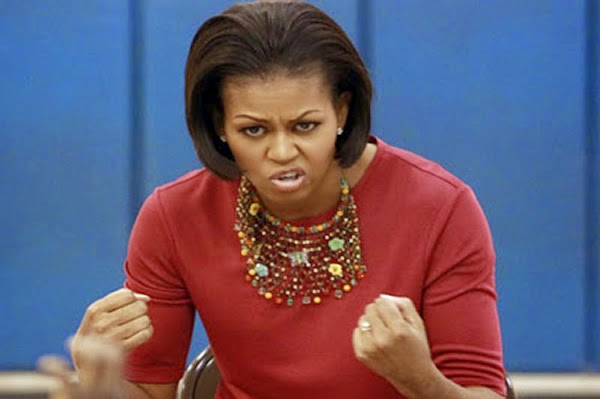 Ye are of your father the devil, and the lusts of your father ye will do. He was a murderer from the beginning, and abode not in the truth, because there is no truth in him. When he speaketh a lie, he speaketh of his own: for he is a liar, and the father of it. – John 8:44

First lady Michelle Obama may be the only American mom of girls who hasn’t had “Let It Go” stuck in her head at one time or another this year.

Mrs. Obama told PEOPLE ruefully that she has not even seen the animated hit Frozen.

Daughters Sasha, 13, and Malia, 16, “are a little too old,” President Obama explained in an exclusive interview with PEOPLE for this week’s issue.

Said Mrs. Obama: “I really miss the fact that – I used to use my kids as an excuse to see all the Disney movies and now I beg them and they won’t go.”

That little nugget comes from the same interview where they talked about all the horrible racism and oppression they have endured living in Amerikkka.

Isn’t that neat? Michelle Obama is just like us. There was a time when I was familiar with all the Disney characters, along with other popular kids movies and shows.

Not only had I seen all the Disney movies from the mid-Eighties to the mid-Nineties, but I had copies of most of them, along with Grease, The Wizard of Oz, and about 20-30 other “girl” movies. I also spent quite a bit of my limited income on toys, clothes and various other related merchandise. That was just for my daughter. The boys had different movies, shows, toys, etc.

That would be a heartwarming little story the Obama’s told except for one thing – it’s a load of crap.

Not my story, theirs.

You would have to have lived under a rock for the past year or so to not be aware of the story of sisters Anna and Elsa, played by the voices of Kristen Bell and Idina Menzel. It came out at Thanksgiving 2013, made a shitload of money and won a bunch of awards, including two Oscars.

It’s been available on DVD since March, and they’ve been playing it on Starz for several months. I know this because I watched it months ago. I’m not the only guy who has seen it. I know this because I saw a YouTube clip of some Marines singing “Let It Go” while watching the movie in their barracks. That clip was posted back in May.

If Michelle Obama wanted to see Frozen, she would have. If I saw it, most anyone with a pulse and the desire to see it has seen it. But what is especially galling about the Obama’s lie is that the White House has its own movie theater where they show any and all first-run movies FLOTUS or POTUS requests. They don’t have to stand in line or buy a ticket, all they have to do is ask.

If she really felt she needed an excuse she could have held a special viewing party at the White House and invited sick kids or the young daughters/granddaughters of White House staff members. That way they could have turned it into a photo-op.

What’s that? What difference does it make?

The fact that Michelle and Barack Obama teamed up to lie about something inconsequential isn’t the end of the world. But it is an example of a pattern of deception that they have both been engaged in for years. In Barack’s case, we know this pattern goes back to his childhood. Hers goes back at least two decades.

For two years and one month more, they are the President and First Lady of the United States. That’s why it matters.

105 Responses to Everything They Say Is A Lie