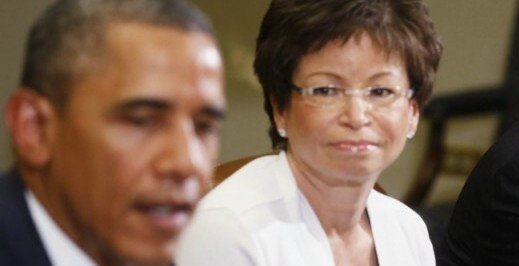 “When you play the game of thrones, you win or you die.”

I TOLD YOU SO!

This story originated “all the way up to the highest levels” of the administration. This is a political hit job.

The Lannisters and the Starks got nothing on the Clintons and Obamas. “When you play the game of thrones, you win or you die. There is no middle ground.”

Seriously, I should be getting paid big bucks for this stuff.

Obama senior adviser Valerie Jarrett leaked to the press details of Hillary Clinton’s use of a private e-mail address during her time as secretary of state, sources tell me.

But she did so through people outside the ­administration, so the story couldn’t be traced to her or the White House.

In addition, at Jarrett’s behest, the State Department was ordered to launch a series of investigations into Hillary’s conduct at Foggy Bottom, including the use of her expense account, the disbursement of funds, her contact with foreign leaders and her possible collusion with the Clinton Foundation.

Six separate probes into Hillary’s performance have been ­going on at the State Department. I’m told that the e-mail scandal was timed to come out just as Hillary was on the verge of formally announcing that she was running for president — and that there’s more to come.
Members of Bill Clinton’s camp say the former president suspects the White House is the source of the leak and is furious.

“My contacts and friends in newspapers and TV tell me that they’ve been contacted by the White House and offered all kinds of negative stories about us,” one of Bill’s friends quotes him as saying. “The Obamas are behind the e-mail story, and they’re spreading rumors that I’ve been with women, that Hillary promoted people at the State Department who’d done favors for our foundation, that John Kerry had to clean up diplomatic messes Hillary left behind.”

Then, according to this source, Bill added: “The Obamas are out to get us any way they can.”

The sabotage is part of an ­ongoing feud between the two Democrat powerhouses.

After the Democrats took a shellacking in the midterms, the White House scheduled a meeting with Hillary Clinton. When she showed up in the Oval Office, she was greeted by three people — the president, Jarrett and Michelle Obama.

With his wife and Jarrett looking on, Obama made it clear that he intended to stay neutral in the presidential primary process — a clear signal that he wouldn’t mind if someone challenged Hillary for the nomination.

“With Obama’s approval,” this source continued, “Valerie has been holding secret meetings with Martin O’Malley [the former Democratic governor of Maryland] and [Massachusetts Sen.] Elizabeth Warren. She’s promised O’Malley and Warren the full support of the White House if they will challenge Hillary for the presidential nomination.”

Which is basically what happened in 2007, when Obama was the beneficiary of the “Anybody But Clinton” sentiment in the Democrat leadership.

But wait? Is this story true?

@realmyiq2xu2 Until some outlet more credible than NYP reports, I will treat this as bullshit meant to sow discord.

The easiest scams to pull off are the ones the sucker wants to believe. I am sure that if you publicly asked all the players if this story was true they would all publicly deny it. What they would tell you privately, however, might be something completely different.

Who gains and who loses from this if it’s a lie?

At this point I doubt that an anonymously-sourced story in the NY Post would affect what the Obamas and Clinton think of each other. It’s sure not gonna harm the Obamas, their legacy is pretty much carved in stone. Warren, O’Malley and others would know if they have been offered clandestine assistance from the White House. Bill and Hillary have nothing to gain from telling that lie about the Obamas.

If it’s a GOP lie intended to sow dissension, it would only work of the two Democrat families were already suspicious and paranoid about each other. I’m not sure what damage it could do, since the dissension would be a preexisting condition.

Or maybe it’s just the NY Post trying to sell a few more papers. Democrats will tell you that the NYP is owned by Ruprecht Murdock, who was a favorite boogeyman liberals used to scare their children long before anybody heard about the Koch brothers.

“If you don’t eat your kale Fox News will get you!”

My experience with the NY Post is that even though they are a tabloid that covers some sleazy topics, they don’t make up lies out of whole cloth. And we all remember when nobody believed it when the National Enquirer said that John Edwards had a secret love child on the way.

Last but not least – *somebody* gave the media the green light to go after Hillary. It isn’t just the VRWC going after her, she is getting attacked by some of the most loyal Democrat media outlets. It’s like in the Mafia or in prison – you can’t kill anyone who is connected without getting permission first.