The Religious Freedom Restoration Act would allow any individual or corporation to cite its religious beliefs as a defense when sued by a private party. But many opponents of the bill, which included business leaders, argued that it could open the door to widespread discrimination. Business owners who don’t want to serve same-sex couples, for example, could now have legal protections to discriminate.

“Today I signed the Religious Freedom Restoration Act, because I support the freedom of religion for every Hoosier of every faith,” Pence said in a statement Thursday. “The Constitution of the United States and the Indiana Constitution both provide strong recognition of the freedom of religion but today, many people of faith feel their religious liberty is under attack by government action.”

The bill received national attention, but Pence signed it with little fanfare in a ceremony closed to the public and the press. The Indianapolis Star reported that members of the media “were asked to leave even the waiting area of the governor’s office.”

Pence’s signature on the bill came despite concerns from organizers set to hold major events in the state. On Wednesday, leaders of the Christian Church (Disciples of Christ) sent a letter to the governor saying they were reconsidering holding their 6,000-person general assembly in Indianapolis in 2017 because of the legislation.

“We are particularly distressed at the thought that, should RFRA be signed into law, some of our members and friends might not be welcome in Indiana businesses — might experience legally sanctioned bias and rejection once so common on the basis of race,” they wrote.

Organizers of Gen Con, which has been called the largest gaming convention in the country, also threatened to stop holding its event in Indiana if RFRA became law. Adrian Swartout, owner and CEO of Gen Con, said more than 56,000 people attended the convention in Indianapolis last year, pumping more than $50 million into the city.

Marc Benioff, CEO of the tech giant Salesforce, tweeted Thursday that the company would now be avoiding Indiana.

But the Human Rights Campaign, which opposed Indiana’s RFRA and other similar bills popping up around the country, has argued the potential for discrimination is huge.

“These bills are often incredibly vague and light on details — usually intentionally. In practice, most of these bills could empower any individual to sue the government to attempt to end enforcement of a non-discrimination law,” wrote the LGBT equality group in a report. “The evangelical owner of a business providing a secular service can sue claiming that their personal faith empowers them to refuse to hire Jews, divorcees, or LGBT people. A landlord could claim the right to refuse to rent an apartment to a Muslim or a transgender person.”

In a statement Thursday, HRC Legal Director Sarah Warbelow said the Indiana General Assembly and Pence have sent a message saying, “as long as your religion tells you to, it’s ok to discriminate against people despite what the law says.”

“This new law hurts the reputation of Indiana and will have unacceptable implications for LGBT people and other minorities throughout the state,” she added.

There is even a #BoycottIndiana hashtag trending on Twitter so you know this shit is serious.

Dad- the religious freedom act may look like something else but it isn’t. Unfortunately Indy is full of hate and it is exactly what it looks like. This started when a baker refused to make a cake bc a couple was gay. It’s not ok and regardless of what the law is supposed to mean, it is absolutely being used for hate. It’s hard to imagine when you are in a more liberal state but mike pence is useless and this law is being used against civil rights. The people supporting the law prove this in our state. I have babies here. Babies I pray look back on these years the way I look back on colored only water fountains. We legalized fair marriage and these are the same people comparing those marriages to humans wedding dogs. I cannot figure out how a state that was part of the Underground Railroad would also hate and prey against gays. I watch one of our best friends be called a fag and a queer and I will NEVER be ok with any of it. Because my liberal, loving dad taught me better.

That last one was from My Darling Daughter who lives in Indiana. That was her reply to me asking if she had actually read the statute because (surprise, surprise!) it doesn’t say what people claim it says.

I raised my baby girl right and she makes me proud. Like her, I support gay rights and same-sex marriage.

My baby girl is a lot smarter than me but she didn’t go to law school like I did.

Here is what the new law says:

It was modeled after this law:

SEC. 3. FREE EXERCISE OF RELIGION PROTECTED.
(a) IN GENERAL.—Government shall not substantially burden
a person’s exercise of religion even if the burden results from
a rule of general applicability, except as provided in subsection
(b).
(b) EXCEPTION.—Government may substantially burden a person’s
exercise of religion only if it demonstrates that application
of the burden to the person—
(1) is in furtherance of a compelling governmental interest;
and
(2) is the least restrictive means of furthering that compelling
governmental interest.

That law was signed by this guy:

After being passed by the House unanimously and the Senate 97 to 3 Bill Clinton signed it into law waaaaay back in 1993. But in 1997 SCOTUS decided that it didn’t apply to the states, so a bunch of them (counting Indiana) passed their own versions of the law. A smaller bunch have state court decisions providing similar protections.

So basically people are freaking out over a Indiana law like the federal government and 60% of the other states also have.

THIS LAW DOES NOT SAY IT IS OKAY TO DISCRIMINATE AGAINST GAYS.

In fact, it doesn’t mention gays at all. Nor does it say that freedom of religion trumps other laws. What it does is it establishes a simple two-pronged test for the courts to use in determining whether a law impermissibly infringes on an individual or group’s First Amendment rights.

In this particular case, the issue is not about a general right to refuse service to gay people. It is about requiring Christian bakers to make wedding cakes for gay weddings.

Is that a compelling state interest? Does it use the least restrictive means? 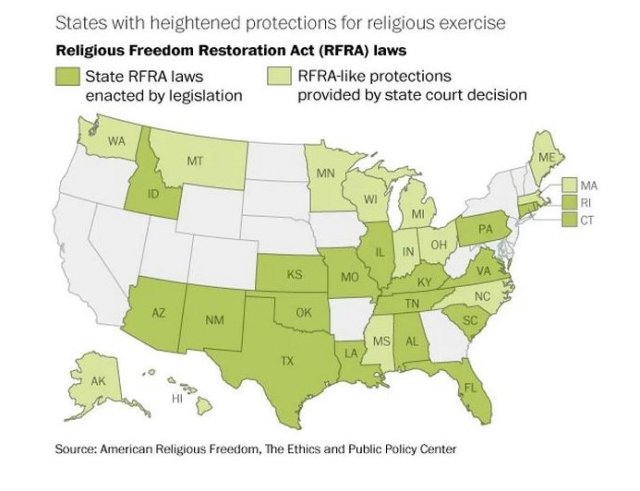 147 Responses to The New Jim Crow?