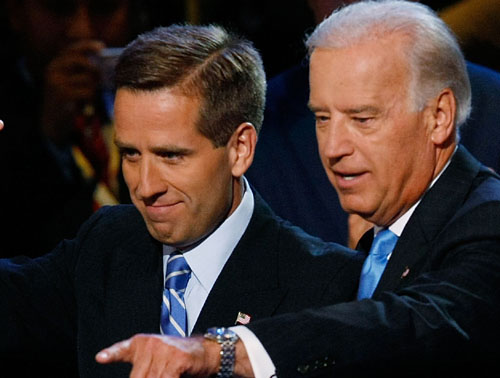 My condolences to Vice President Biden and his family:

Joseph “Beau” Biden III, an Iraq War veteran who served as the attorney general of Delaware and was a son of Vice President Joe Biden, died Saturday at age 46, the White House said in a statement.

He died after battling brain cancer, according to the vice president’s office.

“Beau Biden was, quite simply, the finest man any of us have ever known,” his father wrote in a statement.

Biden had suffered known health problems dating back to 2010, when he experienced a stroke that did not affect his motor skills or speech.

In 2013, Beau Biden was treated at M.D. Anderson Cancer Center in Houston after he became disoriented and weak while on vacation. He was diagnosed with brain cancer, and after undergoing surgery was given a clean bill of health.

Aside from Vice President and Dr. Jill Biden, Beau Biden is survived by his wife, Hallie; two children, Natalie and Hunter; a brother, also named Hunter; and a half-sister, Ashley.

Thankfully all the responses I have seen have been respectful and appropriate. In these hyper-partisan times some people forget basic decency and humanity. Sometimes we have to put politics aside.

Regardless of your opinion of Joe Biden as a politician, he is a father and I have no doubt he loves his children very much. It is always hard to lose a child. You expect to bury your parents, not your kids.

May Beau Biden rest in peace. My prayers and best wishes for his family.

I was born and raised in a different country - America. I don't know what this place is.
View all posts by Myiq2xu - BA, JD, FJB →
This entry was posted in RIP. Bookmark the permalink.