If Hillary Clinton had won the election (sorry, I didn’t mean to depress you), “Trumped: Inside the Greatest Political Upset of All Time” would never have played at Sundance, because it wouldn’t have existed. The movie, which was pieced together in record time, is a sharp, fun, disquieting, and fleetly edited chronicle of the entire campaign year, inside and outside the media bubble, with the focus held obsessively on Donald Trump’s rise.

The film’s directors — Ted Bourne, Mary Robertson, and Banks Tarver — drew on thousands of hours of footage shot for the weekly Showtime documentary series “The Circus,” which followed the acerbic pundit-reporters John Heilemann (a neurotically quick live wire who gets to cuss more than he did in his previous media jobs), Mark Halperin (the sage rabbinical one), and Mark McKinnon (genial third banana) on the campaign trail, getting up close to the action, sometimes in a way that only cinema vérité filmmakers used to be able to do, and unleashing their incisive (and often quite prophetic) commentary. In “Trumped,” the focus is almost exclusively on the Trump campaign, and it includes a couple of angles we haven’t seen before (an interview with Trump on his private jet, a visit to his Mar-a-Lago compound). But mostly the film re-assembles a great many things that we have seen.

So why would anyone want to sit through any of this again?

For masochistic political junkies, there’s a twitchy and morbid media-world fascination to seeing a replay of Trump’s greatest hits (his ride down the escalator at Trump Tower to announce his candidacy; the mocking of John McCain, Megyn Kelly, and New York Times reporter Serge F. Kovaleski; the first time he promised to build that wall). But the real reason to watch “Trumped” takes the form of a question: Knowing what we know now, does the evolution of the Trump campaign look different? Are there hidden signs of what was ultimately to come? And what of Trump himself? On the campaign trail, where his candidacy was rarely taken seriously by the mainstream media (until it was), and where a great many people believed that he could never win (until he did), does he look different in 20-20 hindsight?

In one important way he does: When you watch “Trumped,” there’s an eerie and inescapable sense, from early on in the campaign, that Trump knew he was going to win. You could argue, of course, that his whole style of in-your-face braggadocio is simply based on his pathological need to present himself as a “winner.” That’s the signature of the Trump brand, and since he ran the campaign much as he did his real-estate business — as a pugnacious swirl of smoke and mirrors — you could argue that his angry swagger and puffed-up invincibility during the campaign was just another meaningless piece of Trumpian advertising. Yet Trump, it’s clearer now, saw how the excitement at his rallies was building and catching fire, and he knew that the whole nature of fire is that it spreads. His son Donald Trump Jr. sums this up most perceptively when he observes, “It’s not a campaign anymore; it’s a movement.” He’s right. In “Trumped,” Trump’s bravado plays as less truculent, more onto something, as he brushes reporters aside with a thuggish gleam that says, “I don’t need you.”

The other thing that Trump grasped was the power of social media to create its own reality. In the interview on Trump’s jet, he’s tired and relaxed, and he talks about his revelation that Twitter had rendered the entire world of political advertising irrelevant. With a single tweet (he mimes punching one out), he could rule the mediasphere.

Believe it or not, that was the nicest review I could find. There weren’t many, and the rest of them were scathing. Obviously there weren’t any Trump supporters writing movie reviews.

It’s not a great movie, but it is definitely worth watching. They show some things you didn’t see in the daily news coverage, like the size and enthusiasm of Trump’s rallies. There are a lot of behind the scenes clips too.

The movie is about 1 hour and 48 minutes long, so apparently what they did was they went thru all of those hundreds of hours of footage and selected all the clips where they said nice things about Trump. That left them with only about 1 hour and 45 minutes to fill, so they used some of the bad stuff they said about him too.

The movie could have been better. If you spent the past couple years in a coma and knew nothing about the election or who won this movie would not enlighen you. But that doesn’t apply to any of us. We know how the movie ends, so for us it’s just a little walk down Memory Lane.

The best part of the movie is at the end. They spend quite a bit of time covering election night, starting inside Hillary’s campaign party where everyone was jubilant at first. You get to watch Heilemann and Halperin as it begins to sink in that Trump won. I watched that part about three times. 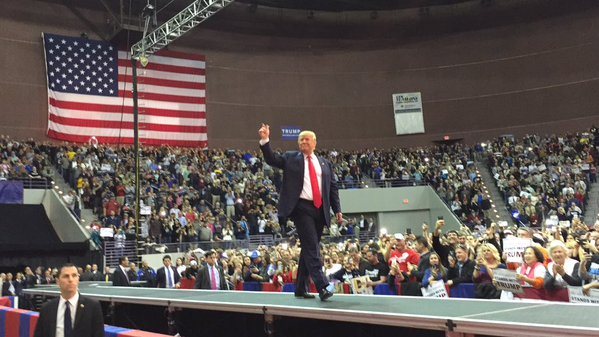 133 Responses to Trumped – The Movie