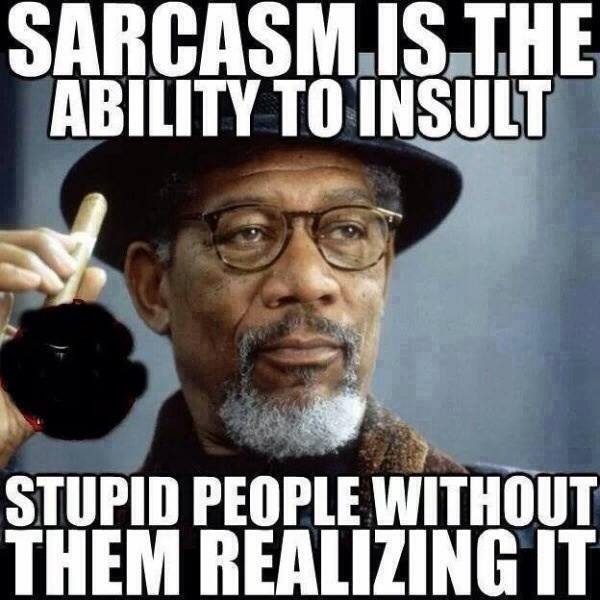 Its been “overnight” for a couple of days now, and my inner clock is totally broken.  So, while thinking about all of us here at TCH, I realized that one of our greatest common denominators is our shared sarcasm.  Sarcasm often gets a bad rap because many people confuse it with its psychotic cousin, cynicism.  A recent scientific breakthrough has finally restored sarcasm to its rightful place as a higher calling:

If you prefer to stay away from the sarcastic souls, if sarcasm is a ‘Term’ you underestimate by tagging as lowest form of wit, if sarcastic conversations appear to you as mere ‘insult or criticism’, you literally need to polish your knowledge. Columbia University, Harvard University and INSEAD Business School worked on the decision making abilities of the people and the organizational behavior expressed by them showed that sarcasm can be linked to the words like ‘creativity’, ‘intelligence’ and ‘smartness’.

Sarcasm is an art to state or comment something which is intended to convey a veiled meaning. An amalgam of humor, wits, sensibility, understanding of the other person’s mentality, coordination between the abstract hidden idea and the uttered words in order to filter out and grasp the sarcasm are all the traits to define a smart person.

If you possess the genes of sarcasm, for sure you have traits that are better than the majority in the world. Here are 10 things that make the sarcastic souls stand out in the crowd:

They create a positive influence on their friend circle– staying with sarcastic people benefits you passively. It demands you to put an extra ounce of pressure on your brain in order to grasp their jokes and comprehend their thought process and pull out the irony of it. So search for a sarcastic friend as hanging out with them would add point in your favor.

They know the art of creating balance between mild insult and fun– conversation with a sarcastic person can leave you awestruck. The art of playing with words is what let them win the game every time. At the instance you would be laughing at your own insult. Sounds disgusting! Isn’t it? But the credit goes to the charm with which they convey the double meaning expression.

They possess a healthy brain– the research by University of California, San Francisco on the brain stimulus say that people who are bad at picking sarcasm signifies a damaged brain. Hence it gives another point to rejoice for the ones who cannot resist from passing on sarcasm-full remarks.

You don’t have to be insecure regarding your friends– it take real guts to deal with sarcasm on daily basis and if you have friends that are still willing to stay beside you, you might have hit the Jackpot. You can skip those boring small talks and spend your entire day hitting each other with these funny insults.

They don’t pretend to be the vulnerable beings on this planet– even if you would attempt to counter back with sarcasm; they won’t let themselves be your victim. Bearer of a strong heart as well as a strong mind is their character trait. Anger and jealousy can never overpower their sarcastic skills.

They are good communicators– how fantabulous it sounds to be tagged as the ‘life of a party’. Yes! The people with sarcasm can grab everyone’s attention in the minutest action. Who would ignore those crackly chats that can lighten up the mood?

They are encyclopedia of solutions– without any sort of hesitation; you can make an entire list of those weird problems that demand an extraordinary solution. These sarcastic friends will juggle up the box of creative solution to find the best one for you. Creativity is synonymous to them after all.

Spontaneity is a well spotted trait in them– these jerks of your life are actually very smart and instant thinkers. It takes nanosecond for their brain to pop-up the wittiest response.

They are the mind readers– sarcastic people are damn good at analyzing people’s mentality and though process. A psychologist at the university of Haifa correlates sarcasm and ability to understand others emotional state of mind. You need to be cautious as these super power possessors can pick up your weakness and trigger your emotions.

They are excellent abstract thinkers– frequent encounters with sarcastic ideologies give them chance to expand their bandwidth. In order to extract the meaning from the sarcasm they work-up their brains. Creativity if ignited at this particular moment.

Now take a moment and let your friend know how fantastically smart you are. Bragging a bit won’t go wrong in this case. So spread the word.