Stay Out Of Persia!

Iran (Persian: ایران‎ Irān [ʔiːˈɾɒːn] (About this sound listen)), also known as Persia[10] (/ˈpɜːrʒə/),[11] officially the Islamic Republic of Iran (Persian: جمهوری اسلامی ایران‎ Jomhuri-ye Eslāmi-ye Irān (About this sound listen)),[12] is a sovereign state in Western Asia.[13][14] With about 81 million inhabitants,[6] Iran is the world’s 18th-most-populous country.[15] Comprising a land area of 1,648,195 km2 (636,372 sq mi), it is the second-largest country in the Middle East and the 17th-largest in the world. Iran is bordered to the northwest by Armenia, the Republic of Azerbaijan,[a] and the Azerbaijani exclave of Nakhchivan; to the north by the Caspian Sea; to the northeast by Turkmenistan; to the east by Afghanistan and Pakistan; to the south by the Persian Gulf and the Gulf of Oman; and to the west by Turkey and Iraq. The country’s central location in Eurasia and Western Asia, and its proximity to the Strait of Hormuz, give it geostrategic importance.[16] Tehran is the country’s capital and largest city, as well as its leading economic and cultural center.

Iran is home to one of the world’s oldest civilizations,[17][18] beginning with the formation of the Elamite kingdoms in the fourth millennium BC. It was first unified by the Iranian Medes in the seventh century BC,[19] and reached its greatest extent during the Achaemenid Empire founded by Cyrus the Great in the sixth century BC, stretching from Eastern Europe to the Indus Valley, becoming a larger empire than previously ever existed in the world.[20] The Iranian realm fell to Alexander the Great in the fourth century BC, but reemerged shortly after as the Parthian Empire, followed by the Sasanian Empire, which became a leading world power for the next four centuries.[21][22]

Arab Muslims conquered the empire in the seventh century AD, ultimately leading to the displacement of the indigenous faiths of Zoroastrianism and Manichaeism with Islam. Iran made major contributions to the Islamic Golden Age that followed, producing many influential figures in art and science. After two centuries, a period of various native Muslim dynasties began, which were later conquered by the Turks and the Mongols. The rise of the Safavids in the 15th century led to the reestablishment of a unified Iranian state and national identity,[4] which followed the country’s conversion to Shia Islam, marking a turning point in Iranian and Muslim history.[5][23] By the 18th century, under Nader Shah, Iran briefly possessed what was arguably the most powerful empire at the time.[24] The 19th-century conflicts with the Russian Empire led to significant territorial losses.[25][26] Popular unrest culminated in the Constitutional Revolution of 1906, which established a constitutional monarchy and the country’s first legislature. Following a coup instigated by the United Kingdom and the United States in 1953, Iran gradually became closely aligned with the West, and grew increasingly autocratic.[27] Growing dissent against foreign influence and political repression led to the 1979 Revolution, which followed the establishment of an Islamic republic,[28] a political system which includes elements of a parliamentary democracy vetted and supervised by a theocracy governed by an autocratic “Supreme Leader”.[29] During the 1980s, the country was engaged in a war with Iraq, which lasted for almost nine years and resulted in a high number of casualties and financial loss for both sides.

According to international observers, the current Iranian regime (led by Ali Khamenei since 1989) is oppressive, with human rights abuses commonplace.[30] Since the 2000s, Iran’s controversial nuclear program has raised concerns, which is part of the basis of the international sanctions against the country. The Joint Comprehensive Plan of Action, an agreement reached between Iran and the P5+1, was created on July 14, 2015, aimed to loosen the nuclear sanctions in exchange for Iran’s restriction in producing enriched uranium.

Iran is a founding member of the UN, ECO, NAM, OIC, and OPEC. It is a major regional and middle power,[31][32] and its large reserves of fossil fuels – which include the world’s largest natural gas supply and the fourth-largest proven oil reserves[33][34] – exert considerable influence in international energy security and the world economy.

The country’s rich cultural legacy is reflected in part by its 22 UNESCO World Heritage Sites, the third-largest number in Asia and eleventh-largest in the world.[35] Iran is a multicultural country comprising numerous ethnic and linguistic groups, the largest being Persians (61%), Azeris (16%), Kurds (10%), and Lurs (6%).

Democrats and neocons both want Trump to invade Iran, but for different reasons. 15 years ago Neocons were saying, “Anyone can go to Baghdad. Real men go to Tehran.” They won’t be happy until we are bogged down in multiple unwinnable wars.

Democrats, on the other hand, just want Trump to get bogged down in an unwinnable war.

It starts like this: “We need to support peaceful revolution in Iran.”

That sounds nice, but what do they mean by “support?” Do we send guns or do we just clap and cheer? What happens when the Iranian government starts to crush the protests with force?

“We cannot abandon them!”

WE HAVE NO BUSINESS IN PERSIA. People protesting the Iranian government do not necessarily love America. The most likely outcome of a successful revolution would be a new dictator who could even be worse than what they have now.

This is an internal problem and the Persian people need to resolve it by themselves. I wish the people of Persia well. Hopefully we can soon welcome Persia back into the league of civilized nations.

Until then, we need to stay the hell out of Persia.

I meant to add that we cannot trust ANY of the reporting coming out of Iran. I wouldn’t trust the CIA or Twitter either. The Mossad probably has good sources, but I trust Israel to do whatever is best for Israel, not what is best for the US or Iran.

“WHEN IN DOUBT, STAY THE HELL OUT.” 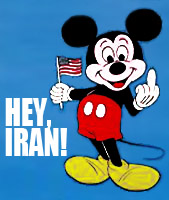 122 Responses to Stay Out Of Persia!