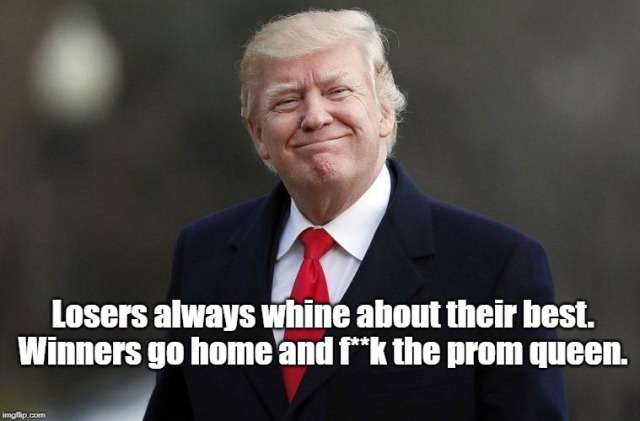 I was thinking today about how four short years ago I was a Trump-skeptic. I didn’t think he was seriously running and even if he was I didn’t believe he would get very far. I figured he would drop out before Thanksgiving.

Here is where I freely admit that I misunderestimated Donald John Trump.

Then today I saw this comment over at Don Surber’s place:

I love the fight in our President!!

Suddenly I had an epiphany. Or maybe it was just a bad acid flashback. I dunno. But I suddenly realized something. I don’t support Donald Trump because he fights.

Polls from 2016 showed that the number one reason Trump supporters gave for supporting Trump was “Because he fights.”

Speaking only for myself, I support Trump because he wins.

You know why the Left keeps attacking Trump’s alleged rhetoric (He’s a meany) and his sexual history? Because they ain’t got nuthin’ else. Democrats won’t even mention the economy right now, but let the stock market crash and they won’t stop talking about how it was all Trump’s fault.

Not one of the dire predictions the Left made about Trump winning has come true. The stock market didn’t crash, the economy didn’t tank, we’re not dying from the fallout from Trump’s nuclear war, gays have not been rounded up and forced to undergo conversion therapy, and while there are indeed mobs of fascist thugs using violence and intimidation to take control of our streets, Antifa is the terrorist wing of the Democrat party.