You Cannot End Racism By Making Everything About Race

I missed this when it originally came out but it’s still relevant today, It’s from a NYT editorial titled “How Ta-Nehisi Coates Gives Whiteness Power” by Thomas Chatterton Williams:

Given the genuine severity of the Trump threat, some readers of this essay may wonder, why devote energy to picking over the virtue and solidarity signaling of the left? Quite simply because getting this kind of thinking wrong exacerbates the very inequality it seeks to counteract. In the most memorable sentence in “The First White President,” Mr. Coates declares, “Whereas his forebears carried whiteness like an ancestral talisman, Trump cracked the glowing amulet open, releasing its eldritch energies.”

I have spent the past six months poring over the literature of European and American white nationalism, in the process interviewing noxious identitarians like the alt-right founder Richard Spencer. The most shocking aspect of Mr. Coates’s wording here is the extent to which it mirrors ideas of race — specifically the specialness of whiteness — that white supremacist thinkers cherish.

This, more than anything, is what is so unsettling about Mr. Coates’s recent writing and the tenor of the leftist “woke” discourse he epitomizes. Though it is not at all morally equivalent, it is nonetheless in sync with the toxic premises of white supremacism. Both sides eagerly reduce people to abstract color categories, all the while feeding off of and legitimizing each other, while those of us searching for gray areas and common ground get devoured twice. Both sides mystify racial identity, interpreting it as something fixed, determinative and almost supernatural. For Mr. Coates, whiteness is a “talisman,” an “amulet” of “eldritch energies” that explains all injustice; for the abysmal early-20th-century Italian fascist and racist icon Julius Evola, it was a “meta-biological force,” a collective mind-spirit that justifies all inequality. In either case, whites are preordained to walk that special path. It is a dangerous vision of life we should refuse no matter who is doing the conjuring.

This summer, I spent an hour on the phone with Richard Spencer. It was an exchange that left me feeling physically sickened. Toward the end of the interview, he said one thing that I still think about often. He referred to the all-encompassing sense of white power so many liberals now also attribute to whiteness as a profound opportunity. “This is the photographic negative of a white supremacist,” he told me gleefully. “This is why I’m actually very confident, because maybe those leftists will be the easiest ones to flip.”

However far-fetched that may sound, what identitarians like Mr. Spencer have grasped, and what ostensibly anti-racist thinkers like Mr. Coates have lost sight of, is the fact that so long as we fetishize race, we ensure that we will never be rid of the hierarchies it imposes. We will all be doomed to stalk our separate paths.

Imagine a picture of five white kids playing together on a playground, with two black kids standing off to the side watching. Someone like Ta-Nehisi Coates might look at that picture and say “Look at how those two black kids are being excluded.” Someone else might say, “Those black kids should go join in. There is nothing stopping them.” A racist like Richard Spencer might say that it is natural and good for the kids to play with their own kind.

OTOH, a feminist might look at the picture and ask, “Where are the girls?” and launch into a tirade about the Patriarchy.

To be a Leftist these days means seeing everything thru a distortion lens that magnifies race and filters out everything else. Everything is binary – it’s literally black or white. This is how two men like Barack Obama and Colin Kaepernick can be deemed “black” despite being biracial and raised by whites.

I firmly believe that as long as we keep diving people by race we will remain racially divided. 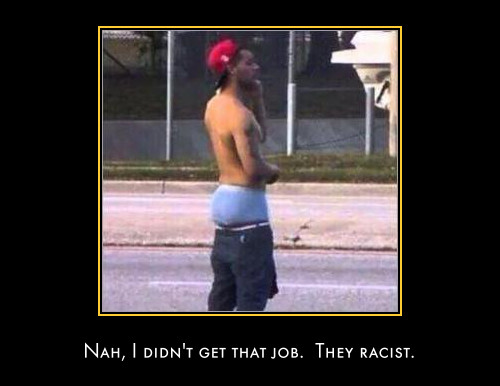