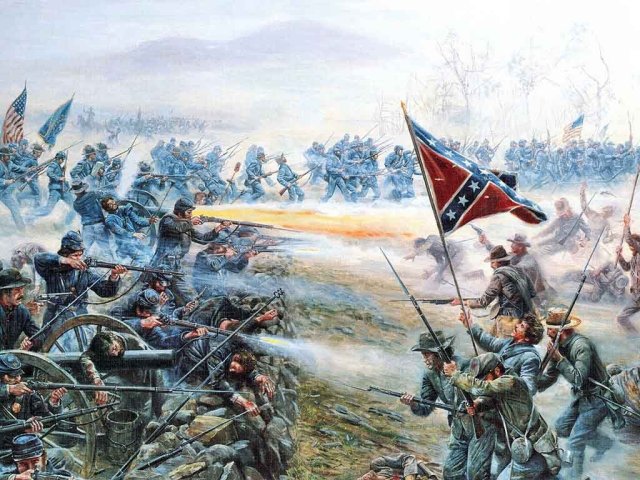 The Battle of Gettysburg

The NYT wants us to believe that slavery is the primary factor in the foundation and development of the United States. They want us to believe that slavery defines and shapes us to this day. The NYT is full of shit. We inherited slavery. We ended it. The fight to end slavery and the struggle for equal rights says far more about us than slavery does.

Lyman Stone at The Federalist:

Slavery In America Did Not Begin In 1619, And Other Things The New York Times Gets Wrong

The New York Times has published a series of essays about slavery, race, and American politics under the heading “1619 Project.” These essays cover an enormous amount of terrain: music, constitutional theory, economics, management, ethnic identity, and more.

Many conservatives responded negatively, which at first perplexed me. Slavery was a huge part of American history and has affected every facet of our society. A collection of articles outlining this history seems as good a topic as any to write about.

But zoomed out from the mostly mundane minutiae of individual articles — in the absence of slavery and thus without as much African influence in our music, what would American music sound like? — a larger concern animates the 1619 Project. The project’s central purpose is not simply to educate Americans about the history of labor accounting from plantation to data visualization, or an account of the history of brutal sugar cultivation, but to give a specific narrative about what America is.

The project’s summary makes the aim quite clear: “[The 1619 Project] aims to reframe the country’s history, understanding 1619 as our true founding, and placing the consequences of slavery and the contributions of black Americans at the very center of the story we tell ourselves about who we are.”

Considered this way, the 1619 Project looks very different. It isn’t mostly about helping Americans understand the role played by plantation agriculture in American history. It’s mostly about convincing Americans that “America” and “slavery” are essentially synonyms.

It’s mostly about trying to tell readers they should feel sort of, kind of, at least a little bit bad about being American, because, didn’t you hear? As several articles say explicitly, America, in its basic DNA, is not a liberal democracy, constitutional republic, or federation. It’s a slave society.

This story of slavery as something somehow “foreign” to many Americans will read as a bit much to many enthusiasts of the 1619 Project. If Americans were so unhappy with slavery, why didn’t they abolish it?

My answer is simple: we did. At the risk of historical absurdity, it must be noted that when Georgia was founded in 1732, slavery was banned, making it the first place in the Western hemisphere to ban slavery. But alas, the appeal of plantation wealth was too great, and by 1752 the King George II (the father of the George we rebelled against) had taken over Georgia as a royal colony, and instituted slavery.

But then something changed. Revolutionary agitation led to war in 1776, and by 1777, Vermont’s de facto secession from New York and New Hampshire created the first modern polity in the western hemisphere to forbid the keeping of slaves. In 1777, war with Britain was barely begun.

Vermont was hardly secure. But in their opening salvo to a watching world, Vermonters made clear what they thought America was about: liberty for all mankind. In 1780, still amidst the guns of war, Massachusetts’ constitution rendered enslavement legally unenforceable, and the judiciary soon abolished it.

Numerous states followed suit. Their exact procedure varied: some immediately emancipated all slaves, some used gradual emancipation, and some tried other “creative” methods. But the point is that, unlike in some early-abolition countries like France or Peru, or in Georgia’s early free status, abolitionism stuck in America.

The fledging Confederation Congress set aside the majority of the land ceded from Great Britain as free soil. Despite concerted attempts by southerners to “flip” both Indiana and Illinois as slave states, the early commitment to abolition held fast. Likewise, the United States was the second country, by a matter of weeks, to outlaw the international trade in slaves, after Great Britain. Countries like Spain and Portugal continued thereafter to trade slaves for decades, and Brazil did not outlaw slavery until 1888.

In other words, Americans were early adopters of abolition. We were the first to establish formally abolitionist constitutions and states, the second to ban the trade in slaves, and middle-of-the-pack in achieving uniform abolition of slavery.

America did not invent slavery. Slavery is at least as old as civilization itself. We didn’t even bring slavery to the New World. Native Americans practiced slavery before the arrival of Columbus. But we did something unique in human history. We freed our slaves, and made them citizens.

Historically, slaves stay slaves until outside forces free them, Only once have slaves freed themselves. In Haiti, in 1791 the slaves rose up and defeated their French masters in the only successful slave revolt in history. According to the Bible, the Hebrew slaves were freed when God sent a series of plagues upon Egypt. Slaves have been freed by outside invaders, but that hasn’t always worked out so well. Hernán Cortés allied with tribes that were enslaved by the Aztecs to conquer Mexico, but afterwards, all the indigenous tribes were thralls of the Spaniards.

Slavery was legal in America when our nation was founded. It continued to be legal for about fourscore and seven years. Then we fought a terrible war to rid our nation of slavery. We amended our Constitution to outlaw slavery and to make the former slaves citizens. Years later we fought a legal and political war to ensure that the descendants of slaves would have the full rights and privileges of citizenship.

Nobody forced America to end slavery. We forced ourselves to do it. Later we forced ourselves to end segregation and racism. We did such a good job on the latter one that “racist” is one of the worst labels you can be given. Even actual racists don’t want people to think they are racists.

The NYT is not seeking to enlighten people with the truth, they are cynically seeking to help the Leftist Democrats regain political power.