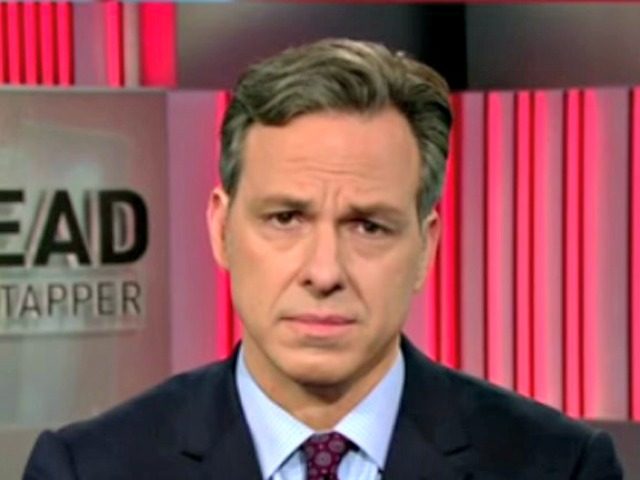 If impersonating a journalist was a crime they would haul away every talking head at the Crappy Non-News network. “Jake the Fake” Tapper is butthurt that the GOP doesn’t want to appear on his crappy show, State of the Union With Jake Tapper.

Meet The Press (MTP) used to be the King of Serious News shows. 60 Minutes got the ratings, but it was aimed at the hoi polloi. MTP was a show for serious people who wanted to watch serious discussions of serious issues. Seriously. It first aired in 1947.

Sunday mornings now have a plethora of crappy news shows. Each and every one of those shows is filled with second and third-rate talent and they strut around like they (and they alone) are the spiritual heirs to the boring old white guy serious journalists of the olden days of yore.

In 2009 CNN decided to start its own serious Sunday morning news show. So that no one would think they were just copying MTP, CNN hired the former producer of MTP to run the new show. John King was the original anchor, followed by Candy “I kicked Mitt’s Ass” Crowley. In 2014 Candidiasis announced her departure, and Jake slid into the rather voluminous seat she vacated.

You can tell Jake is a serious journalist by the perpetually morose expression on his face. Jake got his start in journalism by working as the campaign press secretary for the woman who would become Chelsea Clinton’s mom-in-law. After 6 years of flacking for Democrats and Democrat causes, Jake had all his Democrat tattoos removed and became a neutral, non-partisan journalist.

There are actually two Jake Tappers. The first is Twitter Jake. TJ is a political moderate who is willing to acknowledge mistakes and who will admit that the Democrats occasionally lie and engage in hypocrisy. CNN Jake is a hardcore Leftist who will not allow any story that does not conform to the official media narratives to see the light of day. CNN Jake is an asshole.

So why is Jake all butthurt?

CNN’s Jake Tapper called out Republican lawmakers on Sunday for their avoidance of CNN amid the latest controversial developments surrounding President Donald Trump.

Tapper kicked off State of the Union by noting Trump has been taking fire from several of his GOP allies lately between his handling of the Turkey-Syria crisis, and also the president’s now-aborted plans to hold the next G7 summit at his Miami resort. In terms of the latter, Tapper said that Trump was “testing the limit” at a time where he “needs the support of congressional Republicans to keep his job.”

As Tapper cycled through other criticisms of Trump while remarking that the impeachment inquiry remains in play, he eventually switched gears and said that “for the fourth week in a row, the White House and top House and Senate Republicans have refused to come on this newscast to answer our questions about all of these important developments.”

“We hope they will come to explain all of this to the American people,” Tapper said. “Because especially at a time when the White House has ended the practice of regular press briefings, they are shirking this important part of their duty to the American public to explain what they are doing with our money and in our name.”

Sarah Huckabee Sanders deserves some kind of medal for her heroic efforts to satisfy the nattering nabobs of negativism’s constant demands and keep their antics in check. For far too many years members of the WHPC were allowed to use the daily press briefings as an opportunity to preen in front of the cameras. But beginning in January 2017, some members of the news media used those briefings as an opportunity to propagandize against President Trump. Then a federal judge appointed by Obama ruled that the White House could not control who was allowed to attend the briefings.

So then SHS stopped having daily press briefings. Sarah didn’t announce a new policy or anything, just one day the briefing was canceled and then the next and the next and yadda yadda yadda they never started again. CNN’s Jim Costa and April Ryan were both devastated. How were they going to attract attention if they could not stage their drama queen theatrics?

I hope this thing with Jake Tapper isn’t just a coincidence. I hope it is deliberate and part of a new strategy by Trump and the GOP. If CNN won’t give Trump and the GOP a fair hearing, fuck ’em. Don’t go on their shows.

Don’t announce a new policy. Obama announced some kind of boycott of Fox but that didn’t work out so well. Just … don’t go on CNN. If anyone asks you if you are boycotting, deny it. But don’t go on their shows.

You know and I know that CNN is not a news network. Oh, they used to do the news and maybe someday they’ll go back to doing the news but right now CNN is nothing but an outlet for Democrat propaganda. If you don’t believe me just ask Project Veritas – they have the undercover videos to prove it.

CNN does not care about ratings. It’s a good thing for them they don’t care because their ratings suck. They only good thing you can say about CNN’s ratings is they are beating MSNBC. Both networks are being crushed by FOX and they are regularly beaten by reruns of old TV shows and QVC.

Nobody tunes in to CNN because they want the news. They tune in to CNN to be reassured that Trump will soon be impeached. Leftists tune in to get reinforcement of their beliefs. The USSR discovered that with intensive brainwashing you can get just about anybody to do anything. The problem is the effect wears off and must be reinforced. And the farther the brainwashing is from reality, the more reinforcement is needed.

So why does Jake want Republicans on his show? It sure ain’t because he likes them and wants to help them spread the Gospel of Trump. It isn’t because Jake is looking for true and accurate information. CNN is the Mothership of Fake News. And it is not because CNN wants to present both sides fairly.

CNN craves credibility. It is tempting to say they have none, but they still have quite a bit of credibility with what Leftists call “lo fo” voters – low information voters. The term does not refer to their intelligence or imply they are ignorant. It simply refers to people who don’t follow politics or the news. The undecided voters. Once upon a time, CNN had a good reputation as moderate and fair. That was when CNN was primarily a news network. CNN has not been primarily a news network since back when MTV still showed music videos.

CNN needs Republicans to appear on their shows to create the illusion of fairness. RINOs are becoming an endangered species. They also depend on ambush journalism to please their far-left viewers. So they put the GOP guest in a studio where he is mic’ed up. Give him a nice, friendly interview, then at the end hit him with a question that leaves him stammering as you go to commercial. Guess what the only part of the interview is that makes it on the air?

Ask yourself this: What benefit do the Republicans get out of going on CNN?

It the Republicans were smart (odds are 80-20 against) they would adopt Trump’s policies and methods to use in dealing with the media:

1. Ignore them.
2. Be verbally abusive to them.
3. Never say anything nice about them.
4. Never ever trust them.

The old conventional wisdom was that Republicans should kiss the media’s ass. Trump’s philosophy seems to be “Make ’em lick the boot that kicks ’em.”

IMNSHO: Any Republican who fraternizes with the news media should be considered suspect.

171 Responses to Let Them Eat Jake