MSNBC Does It Again 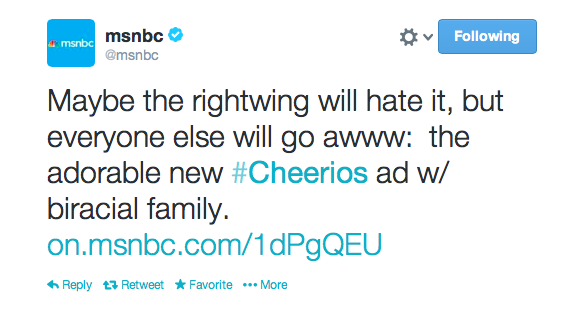 From the Department of Self-Inflicted Wounds:

The left-wing network MSNBC has landed in hot water again over race, this time for calling conservatives racist in a Wednesday tweet about a Super Bowl ad for Cheerios.

“Maybe the rightwing will hate it, but everyone else will go awww: the adorable new #Cheerios ad w/ biracial family,” said the original MSNBC message on Twitter, which was posted late Wednesday.

Three hours later, MSNBC removed the post and issued several apologies on Twitter after the social-media site erupted with thousands of outraged comments, along with photos from conservatives with biracial families.

Leading the charge was conservative commentator Michelle Malkin, who posted a photo of her two biracial children on Twitter and launched the hashtag #MyRightWingBiracialFamily.

“The Cheerios tweet from @msnbc was dumb, offensive and we’ve taken it down. That’s not who we are at msnbc,” said Mr. Wolff on Twitter.

The ad, which is slated to air during the Super Bowl on Sunday, shows a little girl from a biracial family eating a bowl of Cheerios.

From the MSNBC account: “Earlier, this account tweeted an offensive line about the new Cheerios ad. We deeply regret it. It does not reflect the position of msnbc.”

So far the actual author of the tweet has not been identified nor has MSNBC announced that anyone was disciplined or fired, but the original tweet did not write itself. I could be mistaken but I would think that not just any schmuck on the network payroll was allowed to post tweets to the official network account, and there have been no claims that MSNBC was the victim of hacking. This was not an isolated incident.

I am sure that General Mills is not pleased. When you spend a million dollars on a Super Bowl ad you want it to get noticed, but you don’t want to piss people off. Don’t be surprised if they issue an apology as well. On the other hand, I’m not sure what biracial families have to do with breakfast cereal.

This little kerfluffle will probably soon be forgotten. I doubt any network except Fox News will even mention it. But it is revealing about the culture at MSNBC.

The fact that they keep having incidents like this indicates that the kind of statement made in the now-deleted tweet is commonplace inside the walls of that network. The place is a Vile Prog echo-chamber where Republicans and other conservatives are casually slandered as racists.

Contrary to what Mr. Wolffe said, that is exactly who they are. If he really cared, he would do something about it.

@richardwolffedc @msnbc Sadly, that Cheerios tweet is exactly who you are at MSNBC. Your network is a bad parody of real journalism.

Sorry, knuckle draggers. If you couldn’t handle the sight of a—gasp—interracial family in last year’s famous Cheerios commercial, here’s some bad news. You’ll have to sit through a sequel during the Super Bowl.

The General Mills brand on Wednesday unveiled its 2014 Super Bowl spot from Saatchi & Saatchi in New York. And yes, that’s the family from “Just Checking,” the ad from last May that made headlines when General Mills shut down the comments section on the YouTube version because of racist vitriol. That earlier ad turned out to be a major win for the brand, however, as people everywhere jumped to its defense—and the view count on YouTube jumped to nearly 5 million.

I smell a rat. There is absolutely no reason that either of these ads would be considered controversial. I suspect this is a manufactured “controversy” intended to garner attention.

If I’m right it is a clever scam – make an innocuous biracial ad, then claim it provoked a racist reaction. Since the YouTube comments were shut down, you don’t have to prove anything. Even if you did, the ad company just astroturfs some anonymous trolls to post racist comments.

Not that it lets MSNBC off the hook.

133 Responses to MSNBC Does It Again